In celebration of this accomplishment, Jordan has been invited to present his program at the Sam Houston State University, Woodlands Center Auditorium.

“Congratulations on the success of your film! What a huge accomplishment and a great honor,” said Dr. Janet Mullings, Executive Director and Coordinator of the Research Symposium. “We  would love to have you present your film at The Woodlands Center Student Research Symposium.” The program will be presented April 9, at 10 a.m. The Woodlands Center is located at 3380 College Park Drive.

A musical progeny since he was three years old, Jordan was born into a musical family and blessed with perfect pitch, He was placed in a Suzuki master class at an early age where he would transpose the piano pieces into any key that world renowned maestro Pagano requested — on the spot, on television.

When SHSU offered the Fusion Master Degree that Jordan had been looking for in the new frontier of Digital Media, it opened a world of creativity, and he was able to combine his classical training and technologies used for electronic composition, i.e.,Synapse, Cubase, FL Studio, MuseScore, Finale, Sybelius, etc. to create film and new media scores.

For his current film, Magic Medieval Masquerade, Jordan directed, produced, composed the music, interviewed 40 subjects, edited the sound, color and oversaw every aspect of the film production. It was a total, cumulative, immersive wonderful experience for a young film maker. His mentors include Professor Tom Garrett, Dr. Jean Bodon and Prof. Eliza Herrmann, all award-winning film makers and faculty at SHSU. 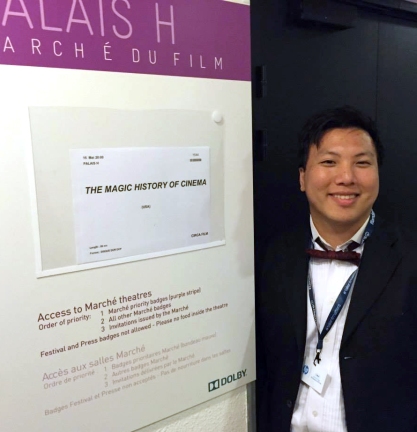 The film project has been submitted to Cannes Film Festival and several other venues around the world. In his previous work, under the expert tutelage and inspirational guidance from SHSU film professor Tom Garrett, Jordan composed the film score for Garrett’s film the “Magic History of Cinema.” It was screened at the Cannes Film Festival’s Marche du Film in March 2015.

The film, an international documentary explored how the origins of cinema are closely linked to the conjurors and illusionists of the early 20th century and how those ties continue with today’s film makers and magicians” explained Garrett, who had interviews for the film, including director Martin Scorsese, author Brian Selznick, master magicians Lance Burton, Kevin James and many scores of filmmakers and magicians.

Jordan is also a world class award-winning concert pianist (Canada Got Talent, Yamaha Young Composer, Arizona Young Artist, Houston Young Artist, featured on ABC and CBS) who will be performing the Grieg’s Concerto with renowned Russian pianist, Dr. Sergey Kuznetsov on April 29, 2016 at the Lone Star Concert Hall. Jordan has been contracted to perform in the Cultural Center of the Philippines (Asia’s “Carnegie Hall” where Van Cliburn was featured at its opening) and other venues in Asia this summer.