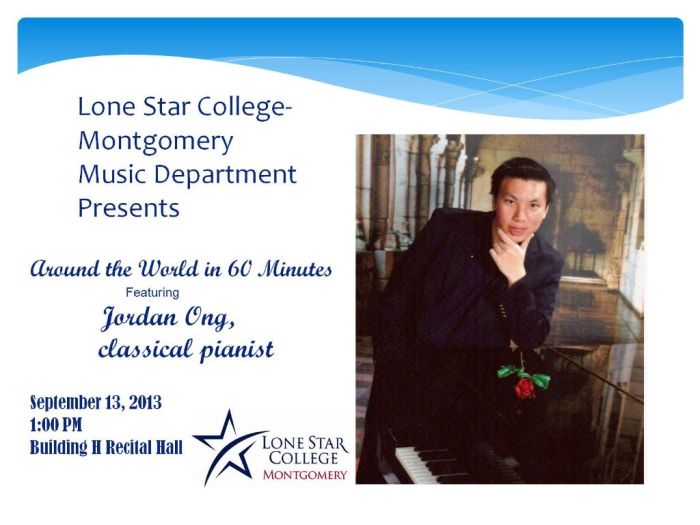 Twenty-year-old Jordan Ong, classical concert pianist, a senior honor student at UT Austin, is a performer and composer who has studied with world-renowned pianists, including Dr. Dariusz Pawlas of Rice University who has been honored to play at Chopin’s house in Poland, and Gregory Allen, of UT Austin, a winner of the Arthur Rubenstein International Piano Competition.

In 2012 and 2013, Jordan was the featured pianist at Project Dream, touring over 15 concert venues in Asia alone. He was also the featured pianist at the Texas State First International Piano Festival in 2010. He has received various medals and awards from the International Chopin Youth Piano Competition, Houston Music Teacher Piano Competition, and the Arizona Young Artist award.

Jordan has been featured on NBC, ABC, Chinoy-TV stations, and at DZFE-FM, Philippines’ national classical music radio station. His CDs are available for the audience’s continuing enjoyment. Jordan has traveled extensively around the world, and his composition at age 7, titled the “Little World Traveler” won the Yamaha Corporation Young Composer award.

For his concert at Lone Star College, The Woodlands, titled: Around the World in 60 Minutes, he has chosen to highlight 6 composers from different parts of the world, ranging from Poland, France, Spain, Argentina, Hungary to China.